I personally violate these tables almost constantly but I have the advantage of actually seeing the bike that I'm build stuff for so I know how much it weighs and I have a fairly good idea of how it's going to be treated and this is important design information.

On the other hand you have to constantly remember that a well built Springer will have a useful lifespan of several decades and over time it may be mounted on dozens of different bikes and you will have no control over what kinds of use those forks will see or how heavy the cycles might be. This is why most production forks are built with such huge safety factors and weigh so much.

The loads placed on forks isn't proportional to the bikes weight but more like an exponential factor so the difference between a 400 pound Chopper and a 600 pound sled with respect to the stresses placed on the forks isn't 30% but more like 90% with respect to the loads the forks will actually be seeing. This doesn't even begin to consider the 'abuse' factor with guys doing wheelies and hitting curbs at bars so if anything these tables are to be considered bare minimum standards to be used as a starting point before anything is factored in. If you're building forks with more than 12-inches of extension you need to do your own engineering as there is almost nothing in the empirical data for choppers with tubes exceeding that magic 12-inch number, at least nothing that anybody will admit to or stand behind as being a certainty.

If you've set yourself up to build some Springer forks it's about a four-hour operation (eight at the most) from start to finish to have a set welded up and ready to go out the door in the 'raw' state. Unfortunately this is only the beginning to having a set ready to bolt to a bike and it's the finishing that's a killer from a time standpoint.

To a huge extent it's the 'finishing' part of the work that you pay for when you're buying a set of forks from a custom maker as this is incredibly tedious and detailed handwork that has to be paid for somehow as somebody has to do the work. I actually think that a good set of forks requires almost double the amount of handwork that we'd be putting into an entire custom bike frame.

It doesn't make much difference whether the forks are to be painted, powder coated or chromed the amount of work is the same only the procedures are different.

Over the course of this article we've shown many shortcuts and workarounds that a person can take but even though there are simple methods for doing certain tasks it doesn't means that you give up on accuracy or quality.

For example we've shown a quick method to build a fixture for welding the pivot tabs into the tube legs. It does work really well and it looks simple but what we can't show is how long it takes to get the tabs properly shimmed and positioned so that they are absolutely in alignment with the legs and perfectly parallel with the companion tab in the other leg. On a typical job it may take thirty minutes, or even more, to perfectly shim and align each tab before they are tacked into place. You have to work accurately no matter how you do the work.

The objective is for you as the builder to come up with new and even better shortcuts than those I was taught and to share those ideas with other prospective builders so we can make fabrication easier and more accurate at the same time.

Back in the sixties and early seventies home-built Springer forks were pretty common but as more and more people got into the 'manufacturing' business fewer folks had a reason to build their own stuff and as a result a lot of knowledge was simply lost over time. We're trying to resurrect that knowledge base at the Handbook.

Today there are at least twelve manufacturers making Springers and a handful of custom makers. The custom stuff is first rate for sure but the manufactured forks can range from fairly good to god-awful. I've had more than a few of the $800 Springers in the garage and to be honest I wouldn't mount these things on a minibike. I have yet to see one where the pivot tabs were actually aligned from one side to another and in some cases the legs themselves were out by an eighth of an inch in comparison to the matting side. I won't even begin to talk about weld quality. They do look good with glitzy chrome but for the most part these are junk components and the chrome by the way starts to peel away almost as soon as you bolt this crap to your bike.

I hope the readers don't go this route and support the importation of cheap crap. You can build a very nice Springer yourself in your own garage or you can buy a quality product from some of guys we've mentioned in this article. As long as people are willing to buy shit somebody is going to be willing to package it and it becomes a vicious circle.

In a similar vein with respect to quality people forget that machine tools weren't invented during the industrial revolution in order to make better products but to make products that were as good as hand-made but produced much faster. For a long time these machines and their operators weren't up to the task so mass-produced products were actually looked down on. As time progressed the tools got better and their operators got way better. Today a skilled operator with the right machines can produce incredibly accurate and beautiful products but they do come at a price a lot of us can't afford. Those of us in this situation have to fall back on hand-made parts but we don't have to sacrifice quality if we're willing to spend the time on the parts we create. There is no reason in the world why a hand made Springer can't be a thing of beauty and perfection if the builder is willing to put the time into it.

There is a point however that you have to consider and that is whether or not you really want to make a part that looks 'machine made' to begin with. I personally like to see at least a little 'handwork' on chopper parts. That's what gives the component some character as opposed to something cut on a CNC milling machine.

Here's a shot of our Springer almost finished. We're still waiting on a stem and the stainless acorn nuts but it looks pretty good especially considering how much it cost. 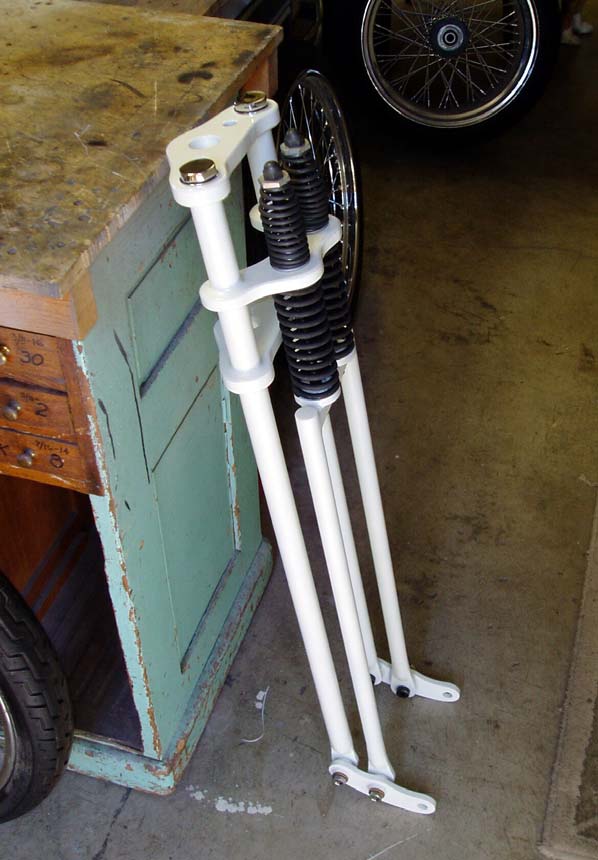 If you can't spend the time to build a set of forks yourself you can check out the products from the folks in the links that follow. Mark Foran at Tixe USA builds some incredible forks at a very reasonable price and Big Daddy Al Wilkerson at Bitter End Old School Choppers actually still builds real Old-School Springers just like they used to be back in the day.

Both outfits will treat you right, as they are real chopper builders and not showroom operations trying to sell forks.

Links To Some of the Best Springer Resources